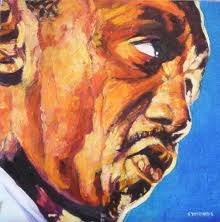 The story of the emergence of Islam in modern America is utterly fascinating and better told by wiser more eloquent scriveners than I. But I can’t keep myself from sharing one chapteras it relates to the concerns of the Washerman’s Dog.

The story starts in a country known today as Pakistan but then as India (British, as opposed to Independent). Regular followers of this humble journal will understand that that is where so many exciting musical stories commence and that telling another yarn is inevitable for me.

In the late 1800s in the provincial town of Qadian, in the Punjab, a spiritually inclined government clerk proclaimed himself a Prophet. Mirza Ghulam Ahmad further considered himself to be the fulfillment of several Islamic and non-Islamic prophecies, in particular, to be the Messiah (Mahdi) expected at the end of the Age by Jews, Christians and Muslims. To skeptical Hindus he spoke of being Kalki the final and yet to appear incarnation of Lord Vishnu.

Beginning with the slow demise of the Mughal empire from the late 18th century and through to its final brutal destruction in 1857 with the full political take over by the British, Indian Muslims were struggling to create a new definition of themselves politically, culturally and religiously.  Christian missionary activity and aggressive Hindu religio-nationalist groups such as the Arya Samaj were increasingly popular.  Qadian was a district under the control of the Sikh ruler Ranjit Singh.  From a purely phenomenological perspective Mirza Ghulam Ahmad’s pronouncements and nascent religious movement can be understood as one response to the formation of a post-Mughal Muslim identity within the context of a multi-faith and very fluid landscape.

Although his self-identification horrified mainstream Islam his distinct message was well received by many.  Today Ahmadis are in every country of the world with the largest population of 4 million in Pakistan where they occupy a social space akin to the persecuted Baha’i community in Iran. Pakistani law has declared it illegal for an Ahmadi to claim to be a Muslim and as recently as two years ago, nearly a 100 Ahmadi worshippers were killed by several Taliban suicide bombers.

Spreading their unique take on the cosmos and of brotherly love has been a key feature of the Ahmadi movement with missionaries setting out from the subcontinent to Europe and North America and Africa in the early years of the 20th century.

In 1920 Mufti Muhammad Sadiq, an Ahmadi missionary landed in New York and was promptly thrown in immigration detention. He had hoped to spread his message to all Americans but found most Christian white Americans feared or hated his message. But within the African American community the heterodox, distinctly non-mainstream religious movement caught on like wild fire.  After being released from detention, Sadiq opined, “If Jesus Christ comes to America and applies for admission to the US under the immigration laws [he] would not be allowed to enter this country because:
1. He comes from a land which is out of the permitted zone. 2. He has
no money with him; 3. He is not decently dressed. 4. His hands have
holes in the palms. 5. He remains bare-footed, which is a disorderly act.
6. He is against fighting for the country. 7. He believes in making wine
when he thinks necessary; 8.He has no credential to show that he is an
authorized preacher. 9. He believes in practicing the Law of Moses
[polygamy].”

By appealing to the poor treatment African Americans had received under Christian slave masters and politicians Ahmadi missionaries welcomed them to “Islam the real faith of Universal Brotherhood.” Tens of thousands heeded the call including many jazz musicians. Indeed, the Ahmadi stream of Islam quickly became the dominant one in America until the 1950s when the Nation of Islam, a largely Black Muslim movement (as opposed to a Muslim Movement), modulated its radical nationalistic stance somewhat to appeal to Ahmadi followers who were growing disillusioned with the leadership’s inability to truly accept and reward African American converts and embrace their culture.

High on the very long and impressive list of jazz musicians who converted to Ahmadi Islam, was the hard-bop drummer, Art Blakey. Born in Pittsburgh, PA in 1919 Blakey played drums behind Thelonius Monk, Miles Davis and Bud Powell, among other giants of jazz.  While on a visit to West Africa (where Ahmadi Islam was quite strong) Blakey converted to Islam.  "I didn't go to Africa to study drums - somebody wrote that - I went to Africa because there wasn't anything else for me to do. I couldn't get any gigs, and I had to work my way over on a boat. I went over there to study religion and philosophy. I didn't bother with the drums, I wasn't after that. I went over there to see what I could do about religion. When I was growing up I had no choice, I was just thrown into a church and told this is what I was going to be. I didn't want to be their Christian. I didn't like it. You could study politics in this country, but I didn't have access to the religions of the world. That's why I went to Africa. When I got back people got the idea I went there to learn about music."

Though he changed his name to Abdullah Ibn Buhaina, he continued to perform and record as Art Blakey, though friends called him ‘Bu’.  In 1947 Blakey formed an all Muslim band called the Seventeen Messengers, which included other luminaries such as Yusuf Lateef, McCoy Tyner, Ahmad Jamal and Sahib Shihab. Over the next 40 years the band became one of the most powerful and loved jazz ensembles in history. Home to and nurturing ground for a galaxy of jazz stars such as Freddy Hubbard, Horace Silver, Donald Byrd, Hank Mobley, Johnny Griffin and Lee Morgan always with Blakey on the drums, The Jazz Messengers created not only the hard-bop sound but epitomized, in the 70s and 80s, the very notion of jazz music. 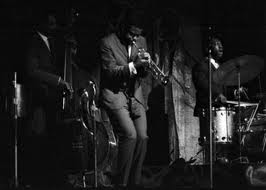 Blakey’s drumming is hard driving and powerful and the music the Messengers made always exciting and energetic. With the amount of talent that moved in and out of the band you would expect that. And you’d be hard pressed to find a more invigorating and vital sound anywhere else in jazz. It is joyous and upbeat but uncompromising. By the 80s Blakey had lost his hearing and was playing by instinct and intuition but still touring with the band.  He passed away in 1990.

Tonight’s selection, Buhaina’s Delight, is a salute to one of the most formidable and dedicated musicians in jazz history but also a tip of the hat to his vision and commitment to get the ‘message’ of Islam and the freedom on music out to the world.

Here’s a review from AMG.

Arguably the finest lineup of the Jazz Messengers (with the possible exception of the Lee Morgan edition), this incarnation of the band -- Blakey, saxophonist Wayne Shorter (here playing tenor), young trumpeter Freddie Hubbard, trombonist Curtis Fuller, pianist Cedar Walton, and bassist Jymie Merritt -- set the tone for the hard bop movement of the '60s. This release features six classic modern-jazz icons and four alternate takes. Starting with Shorter's "Backstage Sally," the band jump into a happy, staccato horn chart and the groove-style shuffle that was their signature sound. Shorter's tenor-led ballad "Contemplation" finds the brassmen solidly behind him as he unleashes a breathtaking solo, while the Fuller-penned "Bu's Delight" is a supersonic hard bopper featuring Blakey's cage-rattling drum breaks and a formidable Walton solo. Written and led by Shorter, "Reincarnation Blues" is another good swinger, with counterpoint and unison lines sprinkled in together. The stunner of the set is Walton's "Shaky Jake," a low, moaning melody with deep-blue harmony soaring over a groove shuffle. On "Moon River," a frisky bopper featuring substantial solos from Hubbard and Fuller and a joyous arrangement modified from the original blue waltz, the song's staggered phrases are introduced and interrupted by drum breaks. The second takes of "Moon River" and "Backstage Sally" are fairly close to the first takes, while the alternate versions of "Reincarnation Blues" and "Bu's Delight" run one to two minutes shorter than the originals. Overall, you won't find a better representation of what modern mainstream jazz sounds like. Blakey and his band are on it from start to finish. (AMG)

I read an article in the men's monthly GQ (The US edition), around 2002 where the identity of Wallace D. Fard Muhammad was uncovered. There was no such thing as Fard, nor a Mohammed to begin with. Slowly, with time pseudo-religious started to use this name as a way to gather around them enough followers (read: dupes who'd be stupid enough to pay money as part of Islamic zakat/tzadakat, or charity).
The founder of the Nation of Isalm (N.I.O.) was an immigrant Palestinian who wanted to take whatever he's learned at his early schooling days (back at the Holy Land, and in the early starts of the last century, kids were taught the Quran and math, plus the mandatory Arabic language). From what I'd realized through further search, that nameless Palestinian man convinced some black-Americans that their freedom was to be at the hand of Islam. They fell for the ruse like flies fall off a Turkish butcher's apron. There was a time when nobody cared to claim that prophetic knowledge was reserved for him ONLY and that was when WW-II broke. After it ended, those remnant black-Mussies reanimated the whole scam and declared a Nation of Islam under the auspice of eh, Elijah Mohammed. Now, if you do the search yourself and inspect closer into this hubbub of a movement, you'd find that these same 'leaders' live extravagant lives and marry young virgins as they claim it's the will of Allah to have as many women as they could marry. The younger? The better.

Through my 'derp-derp-dee-doo's as I am typing this comment, I really don't know what relation Pakistanis have with the whole schwag? This is simply not their movement from the get-go, ma friend. Nope. It seems that, like black N.O.I leaders, they also wanted to cut a share of the flowing money. Every nation or faith has its 'Messiah'/ 'Mehdi'/ 'Qaim'/ Saviour/... and all of these monikers do spell at the end one word: The False Messiah, or Anti Christ.

The Anti-Christ is coming soon, trust me. The signs are all in and ready for his coming. Then and only then, and after the Muslims led by him would kick the Jews our of Palestine/Israel, he would reveal his true identity: one-eyed, broken-eared, hunch-backed, broad-handed man in his 40s who will come originally from a town in Iraq. Old books have spoken a lot about it, and how there would be a war in the Middle east just months before he arrives as a good-intentioned world saviour.

Many will fall again to the newest and lastest ruse. So, yeah be it: it's their asses on the line here.

Black African Americans needed any solace, or let-go of the segregation that nearly annihilated their race in a country where they were thrown like yesterday's garbage in the farthest outbacks to suffer, toil and die without any hope for salvation. The Islamic world outside the Muslim world is full of falsehoods (I'd rather call anything outside the Middle east as 'Muslamic' in laughter after seeing that viral tube vid where a skin-head Briton talks like a dumbtard at one neo-Nazi march against Mussas).

You can be anyone who's anybody in these eschatonic days, and American Muslims? Bahaha.

If McCoy Tyner was one of the original 17 Messengers, as this suggests, he must have been a prodigy. He was nine years old in 1947.