When I was a boy we often took our family Christmas holidays in eastern India at a seaside village with the quaint name, Gopalpur-on-Sea.  There wasn’t much to the village, which was part of its attraction. Our lodgings were set back from the town on a rocky bluff from which we could hear the crashing waves in the distance. We slept in a rambling bungalow, which along with a small chapel and an abandoned and inarticulate building formed an austere settlement once owned by the Baptist church.
One year, rather unexpectedly, the little chapel held a Christmas Day service for the tiny community of Christians, whose population nearly doubled by the inclusion of our family.  The vicar, an elderly Anglo-Indian man, was obviously of the lay variety.  His sermon was brief and very much to the point and went something like this.
“I have no doubt all you who are gathered here are thoroughly familiar with the Christmas story. And so there it little point in my adding to your knowledge. Let us stand together for the Christmas blessing.”
It was all over within minutes.
And so, taking a leaf from that same book, let me introduce (and wrap up) this Christmas post with the briefest of messages:
May peace, rest, joy and health be yours throughout this season and the coming New Year.
And to get you started click here for a selection of alternate Christmas songs.
Track List:
1.     Jingle Bell Boogie.  Big Jack Johnson (Blue Yule)
2.     Christmas Card from a Hooker in Minneapolis. Tom Waits (Blue Valentine)
3.     First Christmas. Stan Rogers (Between the Breaks)
4.     Blue Christmas. Elvis Presley (The 50s Masters)
5.     Christmas Date Boogie. Big Joe Turner (Tell Me Pretty Baby)
6.     Please Come Home For Christmas. Johnny and Edgar Winter (Blue Yule)
7.     On a Christmas Day.  C.W. Stoneking (King Hokum)
8.     Christmas in Prison. John Prine (Diamonds in the Rough)
9.     Christmastime. Larry Norman (Greatest Hits)
10. Christmas Rap. Loudon Wainwright III (BBC Sessions)
11. Christmas Morning. Loudon Wainwright III (Social Studies)
12. On Christmas Eve. John Hartford (Me Of My, How the Time Does Fly)
13. Shut-in at Christmas. Louvin Brothers (Songs That Tell a Story)
14. Silent Night. Ladysmith Black Mambazo (The Very Best)
15. I’ll Be Home for Christmas. The Pilgrim Travellers (Blue Yule)
16. Mary, Merry Christmas unknown (Dr. Ralph Stanely Live)
17. Star of Bethlehem. Neil Young (Decade)
18. Christmas in Southgate. Ry Cooder (My Name is Buddy)
19. Happy New Year. Lightnin’ Hopkins (Blue Yule)
Posted by ajnabi1957 at 9:28 PM 2 comments: Links to this post 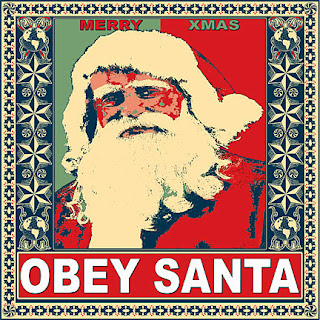 ‘Tis (almost) the season to be jolly!
And with this merry holiday interval comes that other time of year: Best-of-the-Year-Lists Season. In this season every so-called critic, writer, blogger, person-in-the-know and plain old crashing bore feels obliged to set out in orderly fashion an inventory of superlative movies, books, albums and so on, of the year just passed.
And this year add to that number of enumerators, one more: the Washerman’s Dog.  However, the Dog’s list is submitted with a caveat. The albums promoted and praised in this post are NOT albums released in 2010.
What?
Yes, you read right. You see, kind reader, while I am besotted with music, indeed, arguably addicted to the stuff, I rarely keep up with contemporary music. Most of my favorite musicians, groups or artists live in remote countries (vis a vis Australia, that is) or died half a century or more ago. While I do read the music press regularly I somehow rarely get excited enough to purchase the music of a current artist.
And so this list is relevant to 2010 only in that these were the albums that seemed to make the greatest impression on my ears this year. What their actual year of release is, I care not a jot or tittle. It matters only that each album is full of outstanding, fun and moving music.  And so, if that is an acceptable bending of the rule, then I beg you, read on.
2010 was a year that continued the recent trend of my playlists and music acquisition being dominated very heavily by that much-maligned genre, ‘World Music’.  As a label for a crazily wide universe of music, it is as good as any other proffered alternative, and so let’s not get hung up on that. My point is simply that this year, like last, I listened mostly to music that originated in the non-Western world.  Most especially, Africa.  So, naturally this first Washerman’s Dog Best Music of the Year List will be unashamedly biased in that direction.  Again, if that is not too off putting, let us proceed.
Oh, one final confession.  This List is not meant to distinguish between the 10th best and the 9th best. Such a delineation is ridiculous and worthless in my view. On what basis does one judge between 7 and 8 or 6th and 7th best?  (Indeed, to limit  the list to but 10 was unpleasant and arbitrary but it does seem to the standard number, so I comply). These are simply the records I enjoyed the most this year. All of them were Top of the Pops for me for a while during the year and are therefore, worthy of inclusion. To try to rank them would be futile.
Ok. On with it. 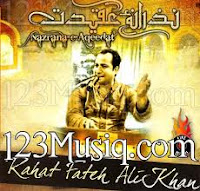 ·       Rahat Nusrat Fateh Ali Khan. Rahat Nusrat Fateh Ali Khan (2009).  This collection came to me rather late in the year, in October, by way of a Pakistani friend who was visiting Australia.  Rahat is the nephew of Nusrat Fateh Ali Khan and got his start singing in his qawwali ‘party’ but has assumed a dominant position in popular Pakistan music. Every track in this collection, a locally produced CD, is a keeper. Rahat’s voice is strong but less bombastic than his uncle’s and he brings a tasteful contemporary sensibility to the songs which are essentially from the deep folk tradition of Pakistan.
To listen click here. 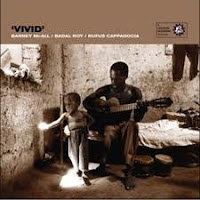 ·
Vivid.  Barney McAll / Badal Roy / Rufus Cappadocia (2006).  What do you get when you mix an Australian pianist, an Indian percussionist and a Canadian cellist, lock them in a studio and tell them to play? An album of eclectic yet strangely coherent music that is impossible either to categorize or resist. Moving between jazz, Sufi, bhajan and Afrobeat (and many stops in between) Vivid has been a favorite not just for 2010 but for several years.
To listen click here. 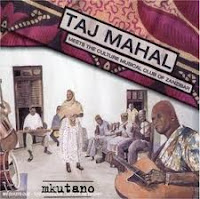 ·       Mkutano. Taj Mahal with the Culture Musical Club of Zanzibar. (2004). The opening track alone, Dhow Countries, a bluesy, breezy paen to the cultures of Africa’s East Coast, is worth the entry price. But each track is a delight in its own right. Taj Mahal, like his old bandmate, Ry  Cooder, is a musical omnivore. His approach to the blues has always embraced the musics of Africa, the Caribbean and the deepest of rural folk traditions. And here, in this little known album, we find our hero sitting in with some of Africa’s greatest Swahili musicians. The combination of taraabi violins, ‘m’banjo, the singing of  ninety year old Bikidude (Zanzibar’s beloved mother of music) and Taj’s raspy vocals captures the atmosphere of East African coastal life perfectly.
To listen click here. 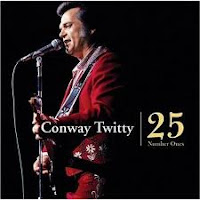 ·       25 Number 1’s. Conway Twitty. (2004).  Where are the other 15? Conway Twitty racked up 40 number 1 hits on the country charts in his life. Songs about adult relationships gone bad are commonplace in country music but Conway brought a level of sexuality to his songs that raised eyebrows by the conservative guardians of Nashville. If you can’t find several in this collection (my favorite: As Soon as I Hang Up the Phone) that make you smile then you really do take life too seriously.
To listen click here. 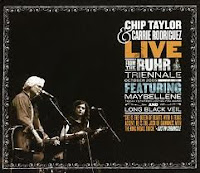 ·       Live from the Ruhr Triennale. Chip Taylor and Carrie Rodriguez. (2007). Chip Taylor is the brother of actor Jon Voight and the writer of some of rock ‘n roll’s classic songs, including, Angel of the Morning. That song, as well Wild Thing (another of his), close a tasty and tasteful selection of other ‘favorites’ from Johnny Cash, Merle Haggard and Chuck Berry.  Sung with utter confidence (its as if Taylor/Rodriguez own these songs) and understated flare, the set includes some inspired guitar picking from Buddy Miller and the enigmatic jazz giant, Bill Frissell.
To listen click here. 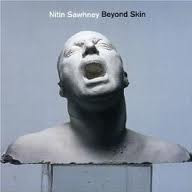 ·       Beyond Skin. Nitin Sawhney. (1999). Sawhney describes himself as an ‘Asian-British pacifist’ and this sublime album, a reflection on India’s nuclear explosions in 1998, is his testimony.  A heavy topic, perhaps, for popular music but he pulls it off with grace and beauty. Never preachy, always intriguing and packed to the rafters with jazzy, chilled-out tunes, Beyond Skin, is a highly accomplished masterpiece.
To listen click here. 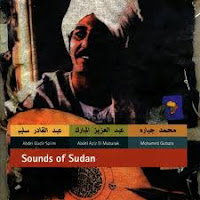 ·       Sounds of Sudan. Abdel Gadir Salim, Abdel Aziz El Mubarak, Mohamed Gubara. (1990). Don’t let the title of this CD put you off. It is not dry ‘ethnic’ folk music. And whatever the media tells us about Sudan, believe me, it has nothing to do with good music. This is a set by three Sudanese master artists recorded in an intimate setting. They sing and play that quintessential Arabic instrument, the oud, with passion and deep emotion. I can’t get enough of these three habibs and keep coming back for more. Now to learn Arabic!
To listen click here. 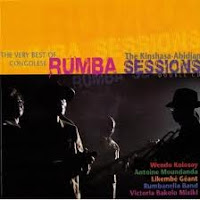 ·       The Kinshasa-Abidjan Sessions: The Very Best of Congolese Rumba. Various Artists. (2007). The ‘genre’ this absolutely top-notch collection extols, Congolese rumba, is a mighty universe unto itself. Arguably, the most influential form of popular music in Africa, building upon African rhythms returning to the continent from Cuba in the 40s and 50s, and democratically embracing musical dialects from West and East Africa, rumba is a lilting dance music structured around tangly guitar runs and intricate rhythms.  Just as bossa nova defined/s Brazilian music so rumba will always be associated with Congo/Zaire/DRC.  The opening track of this collection, Youyou Aleli Veka, is spectacular and sees the giant Wendo Kolosoy yodeling and grooving his way to an incredible conclusion.  Every track, recorded ala Buena Vista Social Club with geriatric superstars coupled with younger admirers, is worthy of repeated listenings.
To listen click here. 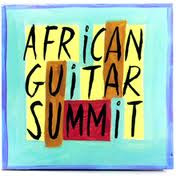 ·        African Guitar Summit. Various Artists. (2004). This collection is the result of a Canadian television program that brought together 9 African master guitarists from across many regions of the Continent to jam for several days. They performed together for a night and then hit the road. The lightning fretwork of Madagascar Slim is a standout as are the smooth meanderings of Alpha Yaya Diallo from Guinea.  But there is nothing at all to dislike about this fantastic record, which won the Canadian Juno Award for Best World Music Album in 2005, except that it ends much too quickly.
To listen click here. 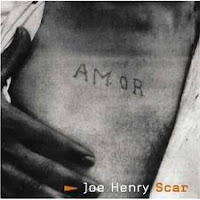 ·       Scar. Joe Henry. (2001).  Joe Henry is best known of late for his production chops that have revived the careers of past luminaries Solomon Burke, Bettye Lavette and Rambling Jack Elliot. In fact, so well regarded and sought after as a producer has he become that his own work has been overshadowed. Scar is an album of strong songs delivered with a ‘choked’ delivery wrapped in some outstanding musicianship from luminaries like Marc Ribot (guitar) and Ornette Coleman (sax).
To listen click here.
Posted by ajnabi1957 at 11:31 PM No comments: Links to this post